Does the Pacific Ocean give us clues about the season ahead?

The clocks have gone back, and Hallowe'en is almost upon us, and so attention begins to turn to the winter season ahead in the mountains.

What will winter 2020-2021 bring to us? Powerful storms? Mild and damp? Inversions? Big freeze? Blizzards? A fair bet in British winter weather terms is a bit of all of it at some point! Which pattern dominates for longest will set the overall tone of the season.

Despite advances in computer power and modelling, long range forecasting is still treated with a degree of caution. The further ahead you try and project, the closer you end up to being only as good as 'chance'. In other words, say a 20% chance of any one of 5 variables occurring! Long range forecasts often start with this idea, and nudge the odds one way or another, to give weight to different sides of a weather story, whether it's simply just to say 'wetter/drier or warmer/colder than average'.

We look around global weather patterns for clues too. This is referred to as 'teleconnections' - where events in one part of the world have a knock on effect to other parts of the globe. It's an imperfect game, because there are so many variables involved.

One main driving factor of short-term climate patterns is the El-Nino Southern Oscillation (ENSO) occurring in the tropical Pacific Ocean. This is periodic shifting of ocean circulation patterns, between warmer and colder phases. The 'warmer' phase is the 'El Nino' pattern, which brings enhanced warmth to the waters of the eastern Pacific off South America. This is where we have been climatologically in more recent years, peaking around 2016.

We're now on the way into the opposite side of the coin, the 'La Nina' pattern (see map, showing current global sea surface temperature anomalies, courtesy https://www.ospo.noaa.gov/). This brings cooler than average waters to the eastern Pacific, and relatively warmer water to the western Pacific around Australia and Indonesia. The result is wetter weather there, and drier weather around the coasts of the Americas. 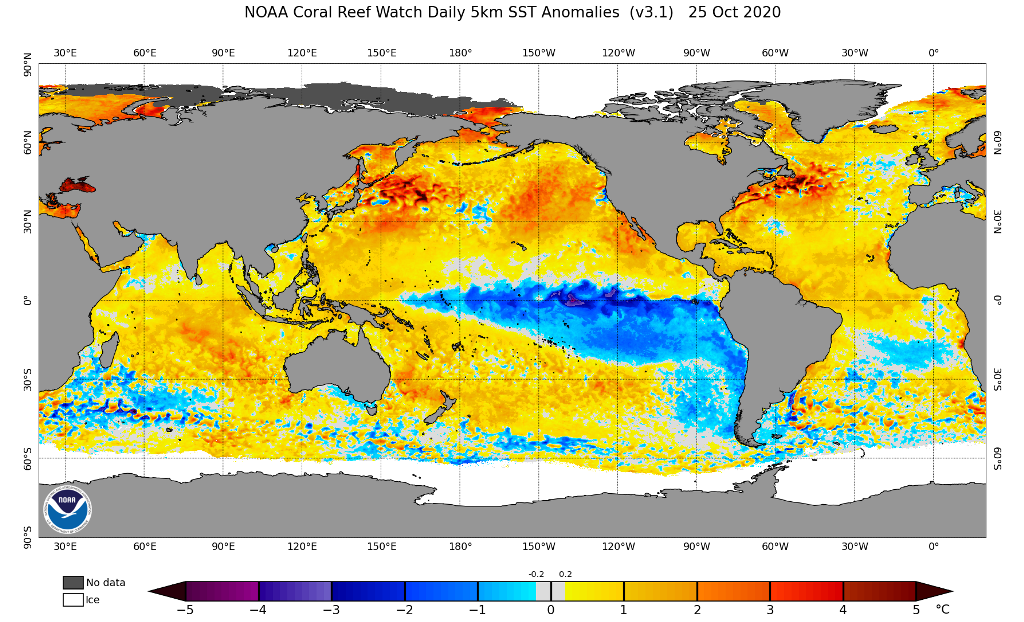 All of this has an indirect impact on patterns over the northern Pacific, promoting higher pressure weather patterns over the ocean west of Canada for example. Complex knock on effects manifest themselves 'downstream' in the atmosphere so to speak, across the north Atlantic.

Historic analysis suggests that the result favours higher pressure scenarios around western Europe early in the winter, with a slowing down of the jet stream - this enhances the chance of drier and colder conditions in late autumn and early winter for our shores, rather than milder stormy episodes. One particular example was the early winter severe cold in late 2010, which indirectly linked back to La Nina patterns.

However later in the winter season, as colder patterns become focused over the North American continent, these patterns tend to stir up the jet stream, which comes back to push stormy patterns back towards us.

So, by this reckoning - colder winter patterns would be expected earlier this season than many recent winters, which have been positively autumnal right through Christmas much of the time! But also, a quicker end to the upcoming winter than recent years, which often only came really cold late in the day - like 2018's March 'Beast from the East'.

The important message is that this is only one factor to consider, and there's no perfect game with weather! The clues are there though, so let's see what develops.