The latest technical thoughts about the heatwave from the MWIS forecasting team:

To follow up on the story discussed in yesterday's blog, here's our latest take on the upcoming extreme heat...

The resolution of weather computer models is relatively coarse in terms of general topography. It is therefore likely that lower elevation sites in the Highlands could see much higher maximum temperatures than would be initially predicted by the forecast models. This may be especially notable in northern areas where the southerly airflow undergoes additional warming by descending from the mountainous terrain.

The least obvious thing in the current weather projections is the western extremity of the hot southerly plume, and as Tuesday proceeds, the advance of colder air from the west.

It sounds like a bit of reverse engineering, but when we look at the temperatures broadly expected at an elevation of 900 to 1300m in the lower atmosphere (essentially mountain top level), we can then calculate the expected temperature down into the glens using meteorological physics - the 'adiabatic lapse rate'. Current indications would give potential maxima of around 34 to 36C inland from the Moray coast through to Aviemore area. Even the Central Belt would be 32 to 34C. Uncertainties will be about the impact of areas of high level cloud and that push of colder air from the west.

Another fascinating point about the upcoming weather event, is the dryness of the air - in part due to the already dry imported continental air, but also due to an inversion. As air sinks and warms through compression, it also dries out. This is why inversions bring clear conditions on the tops when there is moist air and cloud underneath. In this instance, the air is generally all dry, so no fog will exist under the inversion itself - a cloudless inversion.

This particular inversion will be sinking sinking more or less to ground level. This is exceptional.

The charts below are technical forecast charts showing the vertical profile of the atmosphere early on Tuesday. The red line is temperature, blue is dew point. Where the lines are far apart, it indicates very dry air. The 'nose' of the inversion is shown to be very close to the ground, especially over England at this stage. 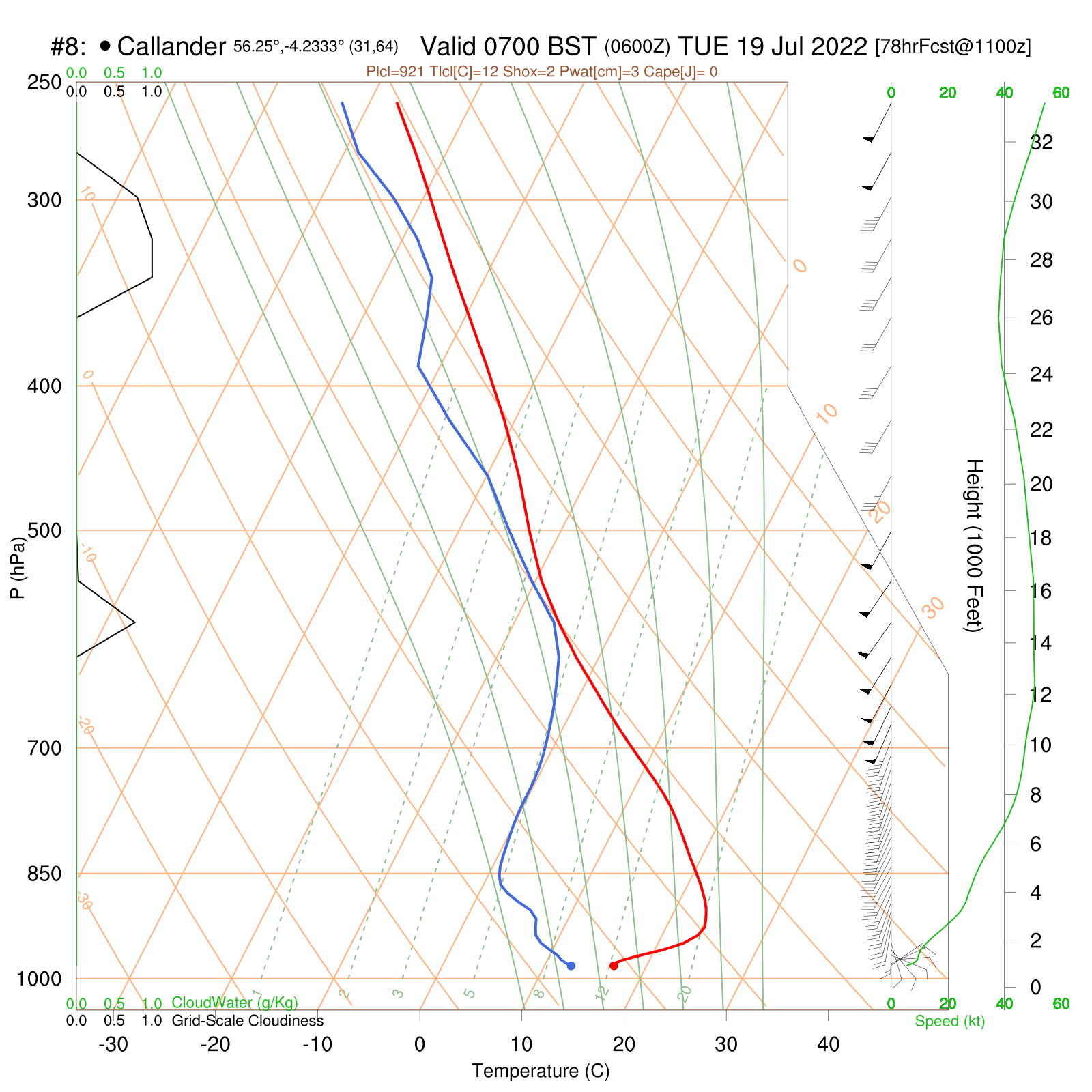 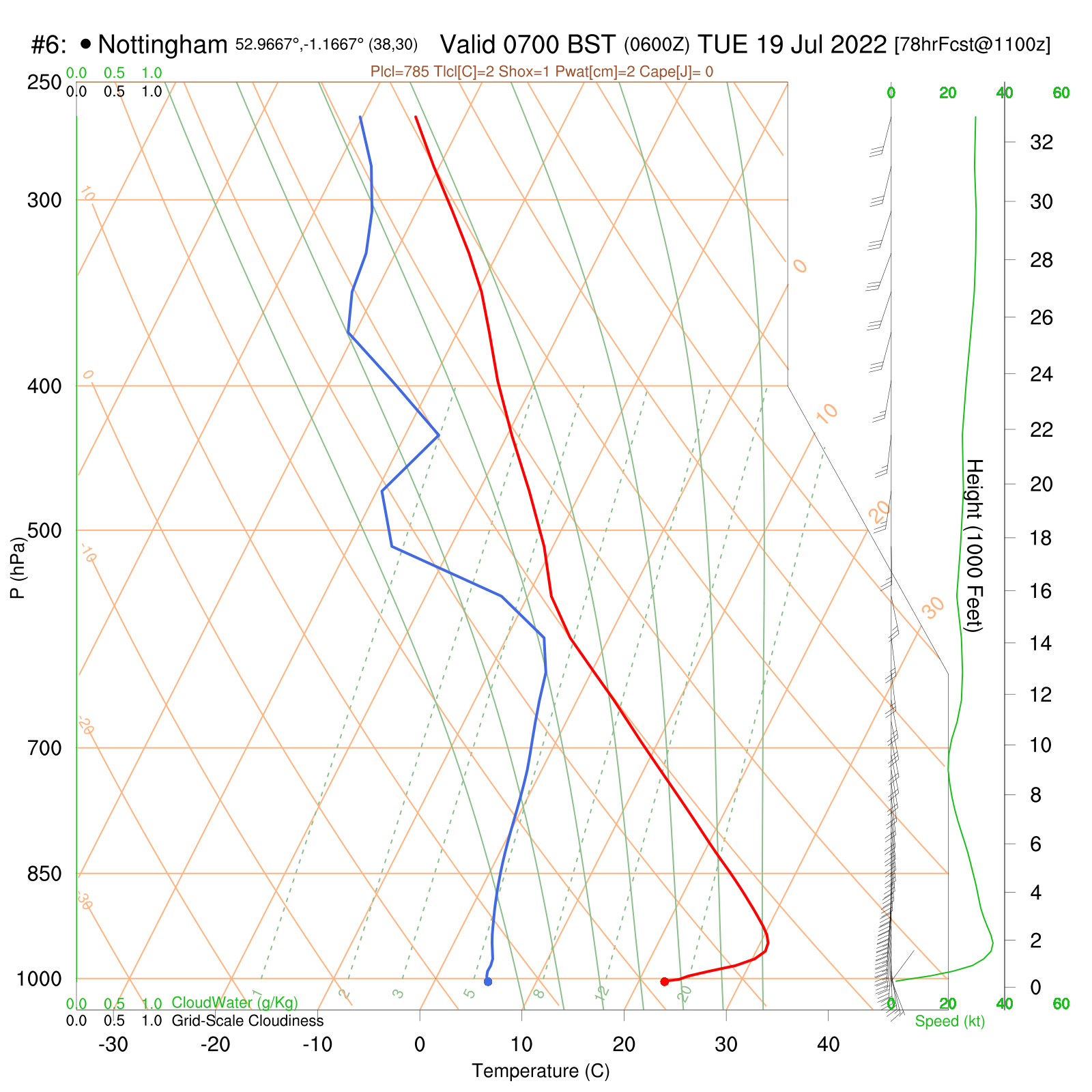 One point to note is that this means it will be difficult to forecast minimum temperatures on Monday night. In some valleys and dips, as heat radiates away from the ground surface under windless conditions, the minimum would drop to 10 to 13C, but where any breeze persists, this will bring the elevated warm air back down to the ground and take the temperature up toward 20C - higher in some southern cities after the intense heating of the previous day. Forecasting models will struggle to resolve such small scale detail.

So on the mountains, there will be exceptionally low humidities (those typical of above an inversion), and 900m temperatures in the mid or high 20s through night into day. Some dropping from the west during Tuesday, though sharpness and timing of this drop is uncertain.

Perhaps the time to be on the hills is actually Monday night - the moon still fairly bright in the sky will be up from about midnight. Dawn on Tuesday morning on a high summit will see the temperature in the mid to upper 20’s (though grass very much colder in topographic dips where the heat radiates away overnight).

Watch out for a very strong and gusty wind though - the southerly wind strengthening on Monday night, may even reach gale force over the Welsh mountains in particular, with sudden gusts downslope north of major summits.

The chart below shows forecast temperatures at an elevation of 700-800m around dawn on Tuesday. Truly extraordinary values are expected.

Looking again at potential UK hotspots for Tuesday daytime - the Vale of York southeastward to Lincolnshire and down to London, where there will be an urban heat island effect. In a southeasterly airflow, slight warming often occurs from the north Midlands to the low lying Lancashire plain and coast - but this would be very close to the westernmost limit of the hot plume. So 38 to 40C is possible around York, and possibly Blackpool. 36C Aviemore; 34C widely elsewhere central and east Scotland.

The interesting thing about this heatwave then, will be how the heat may 'feel'. So often, we experience heat in Britain which also features oppressive 'muggy' air. This isn't the case this time, for the reasons outlined here. It means we are due to experience the type of 'dry heat' more akin to the Middle East or perhaps the continental USA and Australia.

Finally, as lower pressure moves in during Tuesday, destablising the atmosphere, there is scope for thunderstorms as air then wants to rise. However, again due to the dryness of the low level air, the extent of thunderstorm development will be far less than what might be intuitive - albeit where a line of storms do form, they could well be very intense indeed. Very gusty, a lot of lightning, but often not a lot of precipitation (which would include hail) reaching the ground.

All in all, a very fascinating, remarkable and actually unprecedented few days of British weather lie ahead. We reiterate the message to take all due care if considering going out in the peak of the heat.