Difficulties with naming our weather systems

There’s been a bit of chat on social media about the next named storm heading for our shores (a deep low arriving on Monday) - due to be ‘Storm Ellen’. The result, so far, is that it hasn’t yet been named, and depending on predicted ‘impacts’, it might not take a name.

It does open the can of worms which is the existing system for naming storms, and how it is perceived by the public. The concept of naming does have its merits, because it raises awareness of severe weather and gets stories trending in the modern digital media. Of relatively lesser importance, it also makes it easy to refer back to systems in a historical context.

Our storms are officially named either by the UK Met Office, Met Eireann in Ireland, and as of this year, the Dutch met service too. Unlike the Saffir-Simpson wind scale which classifies hurricanes, there isn’t a numerical criteria for our storms. The name comes into effect when an amber warning of wind is due to come into force.

It’s easier to identify tropical storms and hurricanes, because they are generally one individual closed system with a defined eye. Our ‘weather’ comes from ‘mid-latitude depressions’, as described in my recent blog about Dennis. Meteorologically, 'named storms' are not wholeheartedly different beasts to regular areas of low pressure, they're just comparatively more powerful.

The difficulty then is due to presumed impact on the population. Take ‘Storm Dennis’ last weekend for example. The top mountain wind gust at Aonach Mor reached 112mph. The top low level gust was reported at Mumbles Head in south Wales at 84mph, and widespread gusts of 50-60mph were reported inland across Britain.

Fast forward to today - a day without a ‘storm’, and the top mountain wind gust was 105mph on Cairngorm, the top low level gust at Aberdaron was 76mph, and across the northern half of Britain at least, widespread inland gusts over 50mph occurred. Friday was equally as wild across the hills, and many other days recently too. Chalk and cheese?!

It is arguable that in recent years, we’ve had weather systems which have brought damaging impacts which haven’t taken names when they probably should. It’s a tricky one for the official bodies, because if you go overboard with naming, it can become a cry-wolf scenario, and it waters down the impact of weather warnings.

The tricky bit with our ‘storms’ is that strong winds can come from weather systems with a multitude of shapes and sizes. It’s not always an individual centre of low pressure which is responsible for gales. Sometimes it’s a series of separate lows all part of the same parent system, sometimes the strongest winds occur a long way from the ‘eye of the storm’, and sometimes it’s just a squeeze of isobars within a general flow - which is pretty much what we had today.

The chart below is the surface pressure chart as modelled for Saturday afternoon, and also a satellite image from today, annotated to show the nearest centres of low pressure and the frontal system over Britain. A cold powerful westerly flow was producing the stream of showers we’ve become familiar with lately. We're clearly a long way from the centre of any individual low, but it was still blowing a hoolie!

I think there’s room for improvement within the current storm naming system, but that’s for those in the know to assess and deal with. For our MWIS forecasts, storm or no storm, our ‘effect of wind’ statements should tell you all you need to know. Once words like ‘very difficult conditions’, ‘tortuous mobility’ or ‘ferocious gusts’ appear, you know it’s going to be a wild one up on the hills.

Here’s to some calmer weather soon! 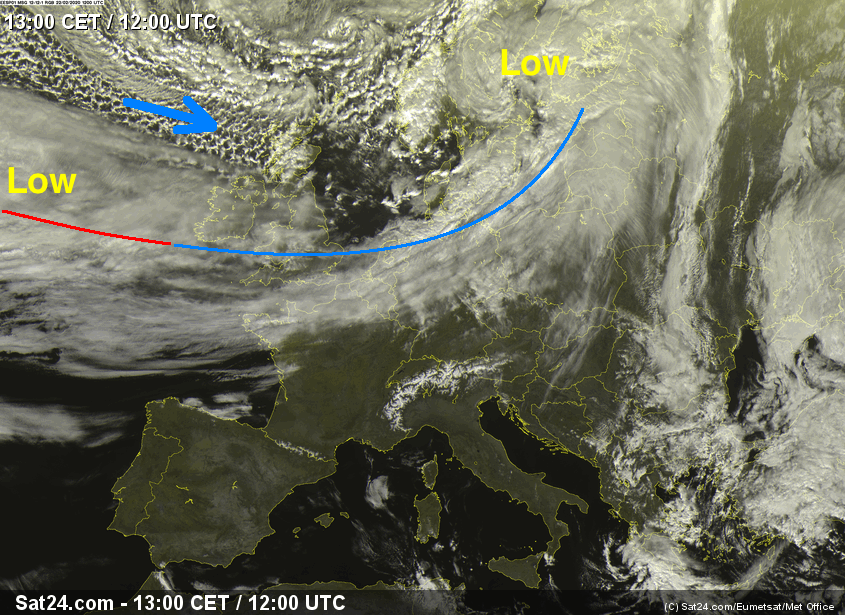