We're often asked how forecasts are made. What ingredients do you need to understand just what is going on from one day to the next? The synoptic weather maps give you a starting point, but a lot of the subtlety requires knowing how the atmosphere is behaving in the vertical. In other words, what characteristics does the air currently have above our heads, and how does that affect surface and mountain weather.

Tuesday's chart shown here is a fairly non-descript situation, with a slack pressure pattern and a weak frontal zone moving through it. The front is the fairly easy bit to understand. It is producing 'some weather', in this case a zone of low cloud and patchy rain, plus upland snow because the air temperature is chilly enough at 600 to 800m upward.

Because it's a quiet weather pattern, this front doesn't have much get up and go, instead will tend to fizzle out as it crosses Scotland. Still expect a few hours where precipitation is around though in the north and west.

What about further south? Not much happening across England and Wales really. However, there is a chance of the odd pop-up shower, but the clues for that require a bit more digging beyond this chart. Take a look at the vertical forecast chart for Leeds below. These are very complex graphs, but you only need to understand a small amount of it to tell a story... 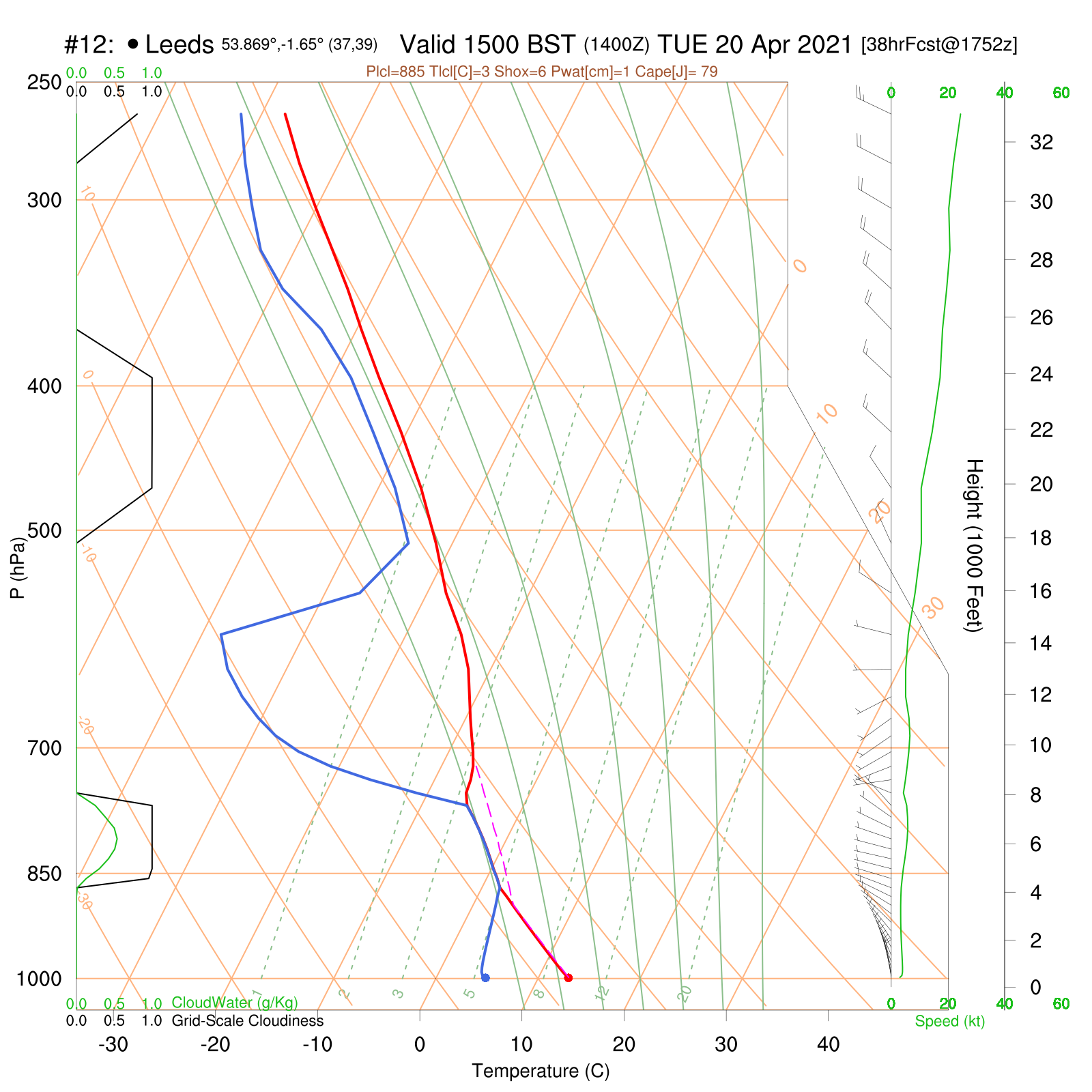 Notice the zone with the pink dashed line. That indicates to us that there is instability in this layer of air, which exists between around 4000 and 9000ft. This air is also saturated, with the temperature (red) and dewpoint (blue) being together. In other words, it is cloud, and a cloud which has a chance to grow vertically. This can lead to a shower. The air is drier and more stable further up, so this shower cloud won't get far before it starts to get eroded higher up above 10000ft. So it's generally not a very showery environment, and not likely to lead to extensive downpours. Somewhere may just catch a burst of rain though, and with little wind, this may sit in one place for a while, so may not seem like a genuine 'shower' if you're the unlucky one!

Have a look at the two charts below for Glencoe on Tuesday. Firstly in the morning, when the front is hanging around, things are rather saturated, so expect an extensive cloud sheet over the hills. By mid-afternoon, things have improved as the front clears, and cloud will thin and break. This improvement is arriving sooner in the northwest. Very clear air and sunshine will follow the cold front, as a drier air mass moves in and pressure begins to build. The odd shower may come into the far north however as a few troughs are still nearby. 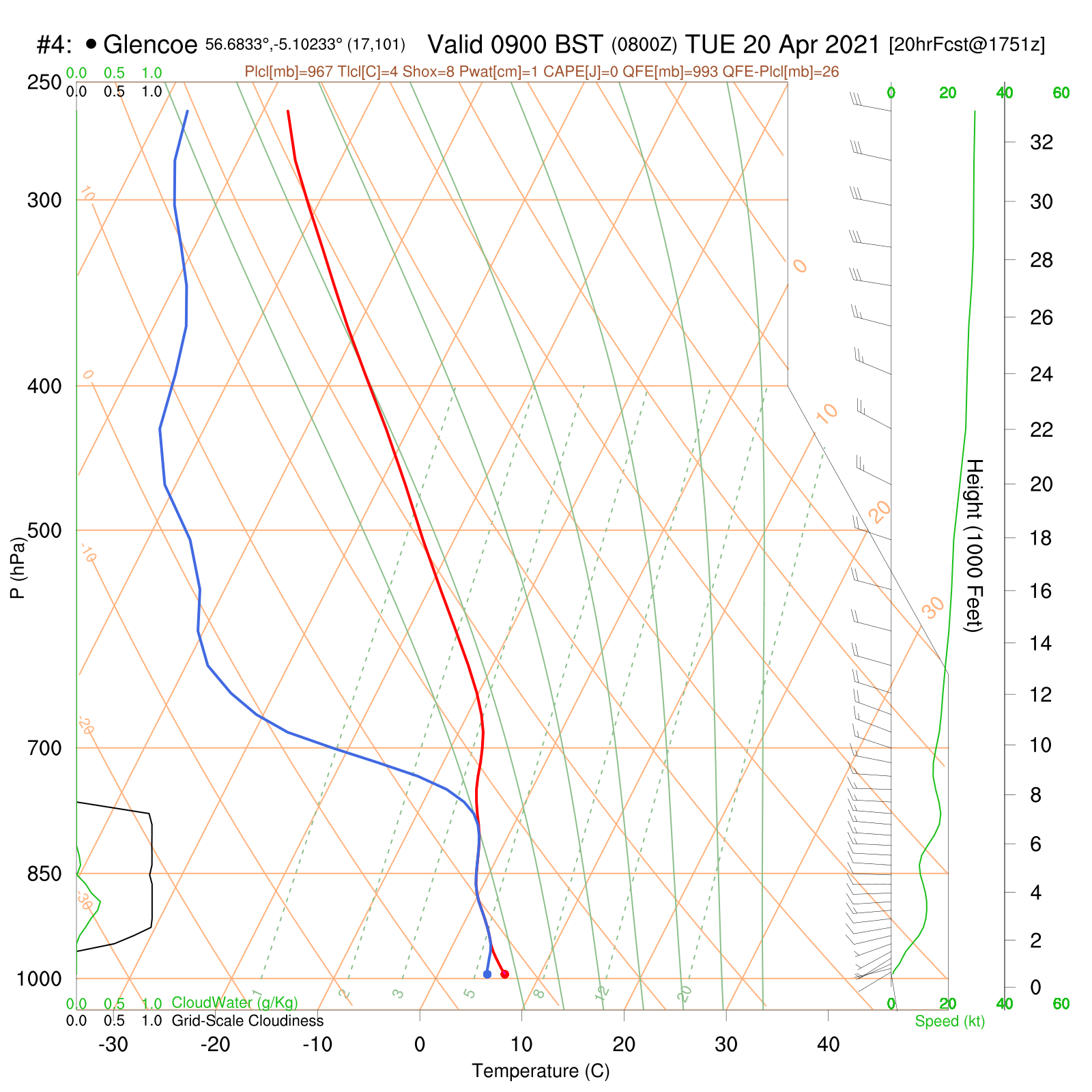 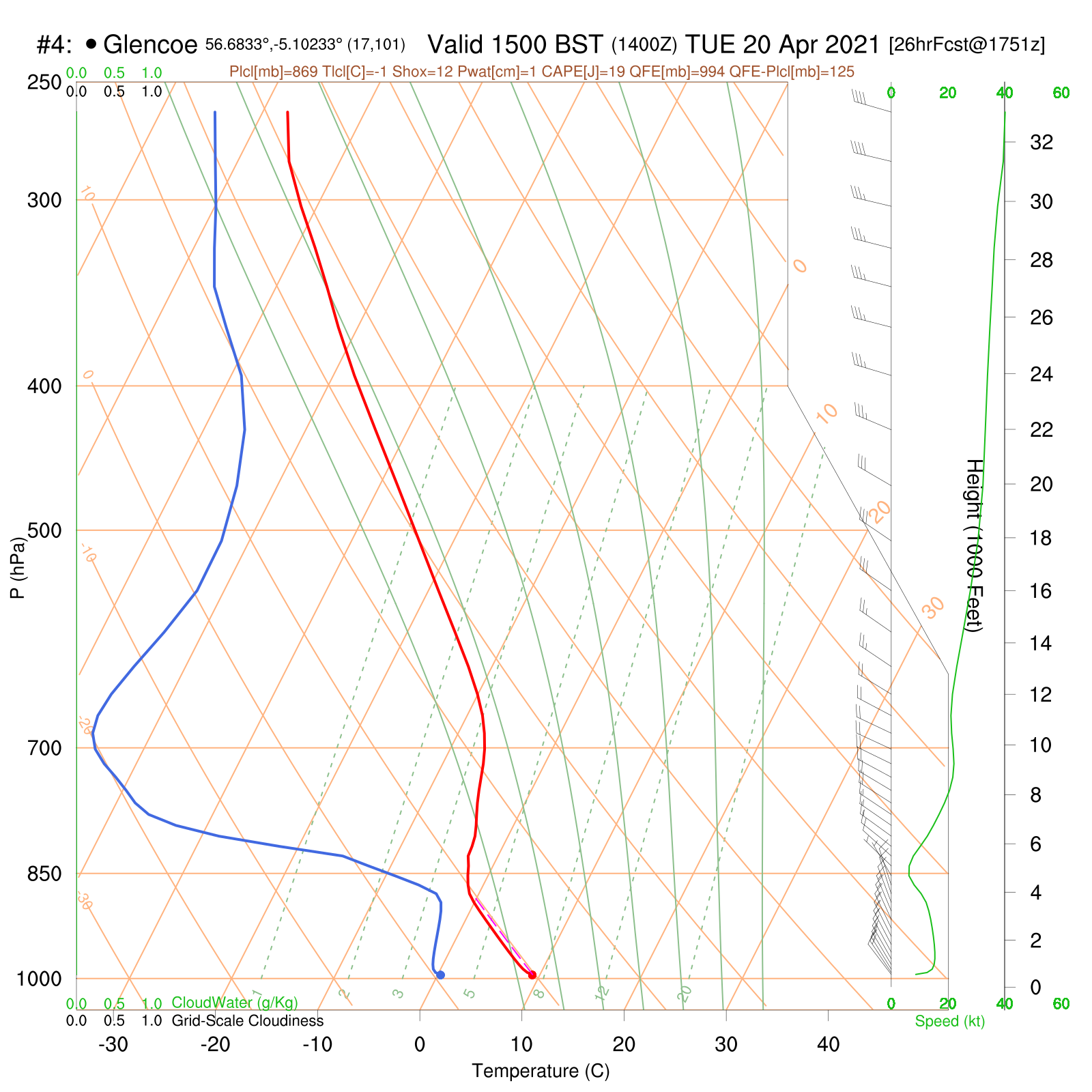 Finally, a glance at the situation through midweek. I've selected Thursday afternoon in central Scotland as an example below. Here is a generally dry atmosphere, with good separation between temperature and dewpoint lines. This is the case throughout much of the day in most regions, so it's telling us there's lots of sunshine and blue sky to be expected. The zone between the surface and 4000ft highlights that there is scope for a few thermals to rise, as there is a decent fall of temperature with height here. A typical situation as the daytime sun gets to work on the lowest layer of air, warming the surface. It may just allow some thin and well broken fair weather cloud to develop inland by the afternoon, but looking at this chart, it's probably only fragments, rather than a sky which will cloud over.

There's always something to see when it comes to weather, even on the quietest of forecast days! All in all, it's looking set fair again later in the week, so expect our MWIS forecasts to look rather void of words, with no rain, clear hills and plenty of sun - beware of sunburn, because the sun is every bit as strong now as in August. 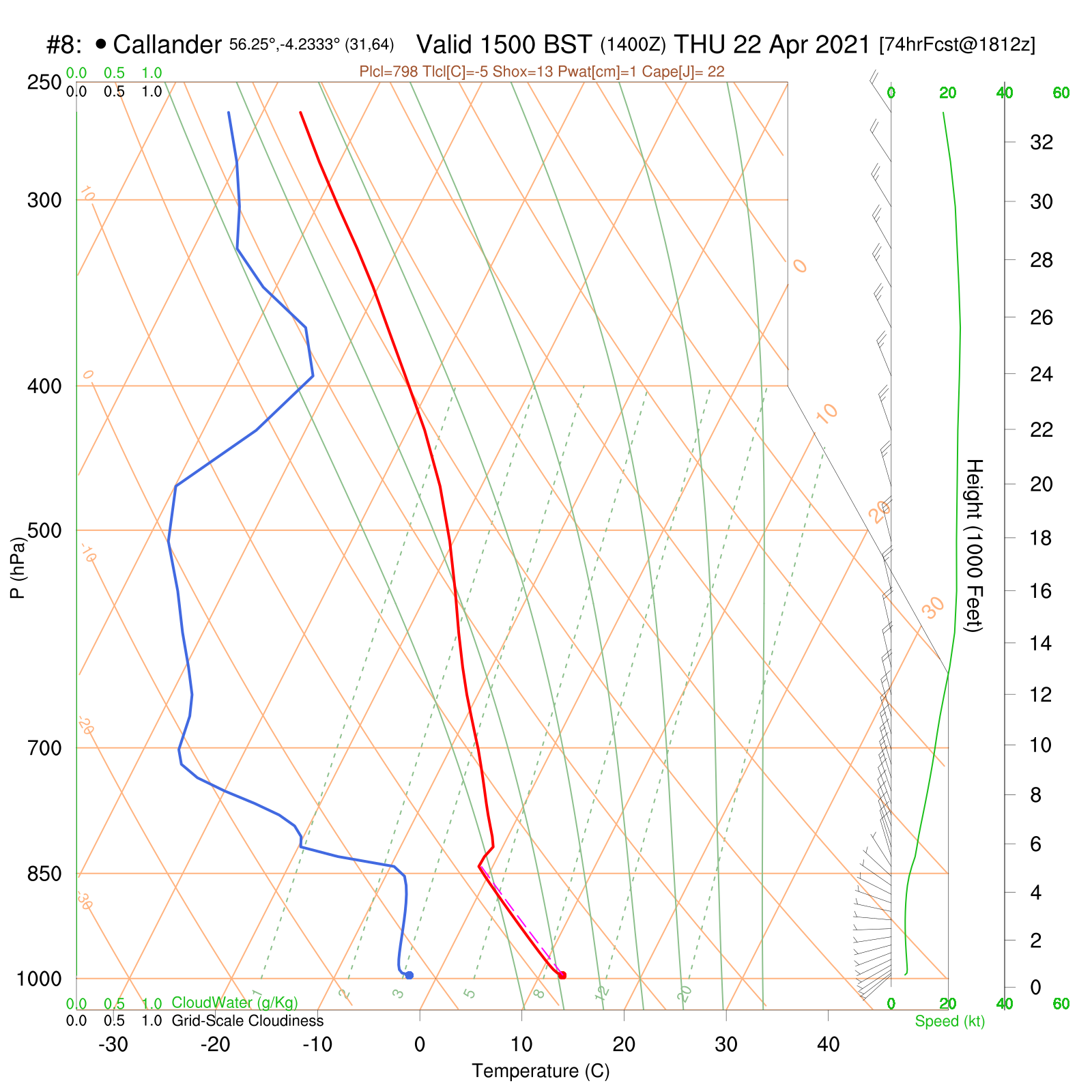