Immersing yourself in cold water is increasingly being touted to provide many health benefits, but sudden immersion in water less than 15ºC, can be very dangerous, even deadly.

“Immersion deaths represent the third most common cause of accidental death in adults, and the second in children, in most countries.”

Sudden immersion in cold water can happen for a number of reasons – through simply falling in, or through voluntarily entering cold water suddenly, jumping in! Young men and the elderly are cited as the most ‘at risk’ groups, but anyone who enters cold water is potentially at risk.  With the popularity of open water swimming many people are taking to the water deliberately for the first time.

Yearly average sea water temperatures around the UK are just 12ºC, with rivers not reaching even that. Remember too that when the water temperature warms a little during the summer, the air temperature has probably risen much more – leading to a greater difference between the two than other times of year. In cold water immersion hypothermia is an ever-present danger, but many people who die from falling into cold water don’t live long enough to become hypothermic.

What are the dangers of cold water?

The sudden change of temperature from immersion in cold water have a profound and varied effect on the human body.

The first thing that happens is the 'Cold Shock' response. This is a human beings innate response to cold water. A person landing in cold water will take a a sudden gasp for air, followed by uncontrollable hyperventilation.  This can cause immediate problems due to inhalation of water into the lungs.  With just ½ a pint of sea water being enough to overwhelm the lungs and cause an adult male to start drowning.

The lungs will be overwhelmed completely by 1.5 litres of sea water.  1.5 litres sounds like a lot of water to drink for example, but when hyperventilating, an adult will inhale that volume or air in a single respiration very easily. So it’s easy to imagine how the panicking, hyperventilating casualty in the water could inhale that volume of water.

If the inhalation of water is avoided, the dangers aren’t over yet.

The sudden cooling of the skin also causes blood vessels to shrink, which in turn makes it harder for blood to flow.  At the same time the heart rate increases, which combined with the reduced blood vessel size, leads to an increase in blood pressure. This means is that the heart has to suddenly work much harder. The rapid rise in work rate, increase in blood pressure can thus lead to serious cardiovascular problems and sudden cardiac arrest in some cases.

The other response experienced by some people is ‘the diving response’.  This is initiated by the immersion of the face in cold water, and causes the holding of breath, and abnormal heart rhythms designed to conserve oxygen in diving mammals.  However in humans this response often conflicts enormously with the cold shock response, again causing cardiac problems and sudden death in some cases.

What to do if you are immersed in cold water

So it is clear that Cold Water Shock is a very dangerous situation, what should we do, in the event that we do find ourselves suddenly immersed in cold water.

The advice from the RNLI, is to try your best to relax.  The initial cold shock response will pass in less than a minute, so trying to stay calm and control your breathing is the best course of action.  Concentrate on trying to float on your back to keep your face clear of the water and stop you from panicking.  Floating doesn’t work if you struggle, so trying to float encourages you to stay still.

Once you have regained control, then seek help, or swim for shore if possible.

If the casualty is removed from the water quickly, they will probably be shivering violently and possibly struggling to use their fingers or hands.   Their core temperature however will not have dropped dangerously unless they have been in the water for a longer period of time.  The exact length of time will vary between casualties, but core cooling in most people will not occur for several minutes.

Help them get to shelter, ideally out of the wind.  Remove wet clothing and give them warm dry clothes to wear.  Give them warm fluids to drink and food to eat.   Their body will generate heat if it has fuel to burn. 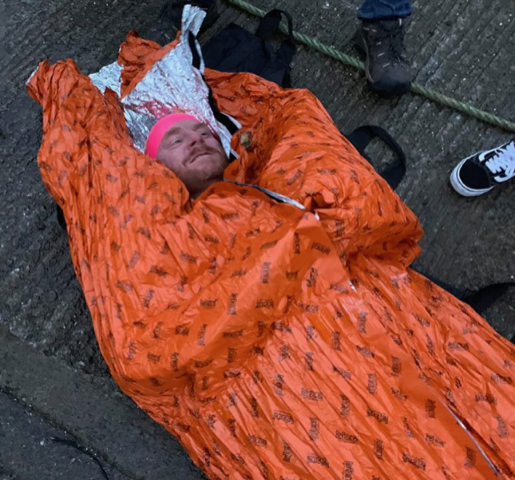 Cory Jones runs Outdoor First Aid Limited (https://outdoor-first-aid-courses.com) and has been delivering Outdoor/Mountain First Aid training courses for the last 15 years. Cory is an International Mountain Leader, Kayak and Canoe Leader based in the north west highlands near Torridon. We hope the first aid blogs posted on MWIS give walkers and outdoor enthusiasts some confidence and skills for safe travel in the mountains. Cory runs outdoor first aid courses for the public to join in partnership with First Aid Training Co-operative (https://firstaidtrainingcooperative.co.uk/outdoor/).