A familiar theme of recent weeks has been rather chilly conditions in the forecast. We've had some fine sunny days and welcome spring warmth, but also a lot of frosts - indeed reports today highlight that we have had the frostiest April in 60 years. This has been caused by frequent northerly air flows, combined with high pressure and clear skies, bringing ideal conditions for such low temperatures. This can happen during the spring, but this year has been exceptional for the persistence of sub-zero nights.

So it seems only fitting that April will end on a chilly note and that cool theme will continue into the start of May too. We have drawn in a cold air mass from the northeast this week, not quite as notably cold as during the Easter period, but still chilly and the mountains are once again hovering around freezing point even during the daytimes.

Heading into the weekend, the synoptic charts don't have much to show for themselves, as things are rather slack pressure-wise - barely an isobar across the country. However, there are tell tale splodges on this chart, which is this model's attempt at predicting showers in a rather low resolution.

'April showers' they might be commonly called, but they can just as easily occur into May. These occur at this time of year when fairly cool air masses cover Britain, but the strength of the springtime sun is enough to set off thermals. Up go the clouds, and down can come hail, snow flurries and the odd rumble of thunder.

With light winds, showers will lumber around slowly where they do form. Not everywhere will get a shower, but if you do, then it may stick around for a while. Subtle variations of the light winds will create localised convergence zones. This aids the air to rise, and gathers together into clusters of showers which can produce some downpours in places, whilst nearby misses them completely.

The chart below highlights the chilly air mass - drawn in blue is the 528 line, which is the usual winter signal for a risk of snowfall to lower hill slopes. The warmth of the spring sun will tend to melt the snowflakes lower down, but don't be surprised to see the odd flurry higher up, and hail is very likely.

The atmosphere above our heads will be fairly unstable, which is weather-speak for the ingredients needed to generate showers. The simple weather map doesn't give much away, but when we look deeper and see cold temperatures higher up, then we know that something is likely to happen. The chart below is the temperature at about 5.5km (around 18,000ft) elevation late this week, which shows values of -30C. This is perfectly normal and common, but it's all we need to trigger the build up of shower clouds. Cold air higher up allows warm thermals to easily rise buoyantly. That's what we mean by an 'unstable' atmosphere.

Our old friend the vertical forecast chart shows the scope for instability too. There is a quick drop of temperature with height - the pink dashed line telling us that things are unstable up to about 15,000ft, so that's the height to which clouds will easily grow. This is enough to make the turbulent up and downdraughts within a cloud needed to create hail.

Locally where wind convergence and topography gives things an extra kick start, the clouds may well grow a bit more, which is all that is required to trigger a heavier downpour with isolated thunder and lightning. There won't be extensive thunderstorms, but it is worth being aware of the isolated risk of thunder in the days ahead. 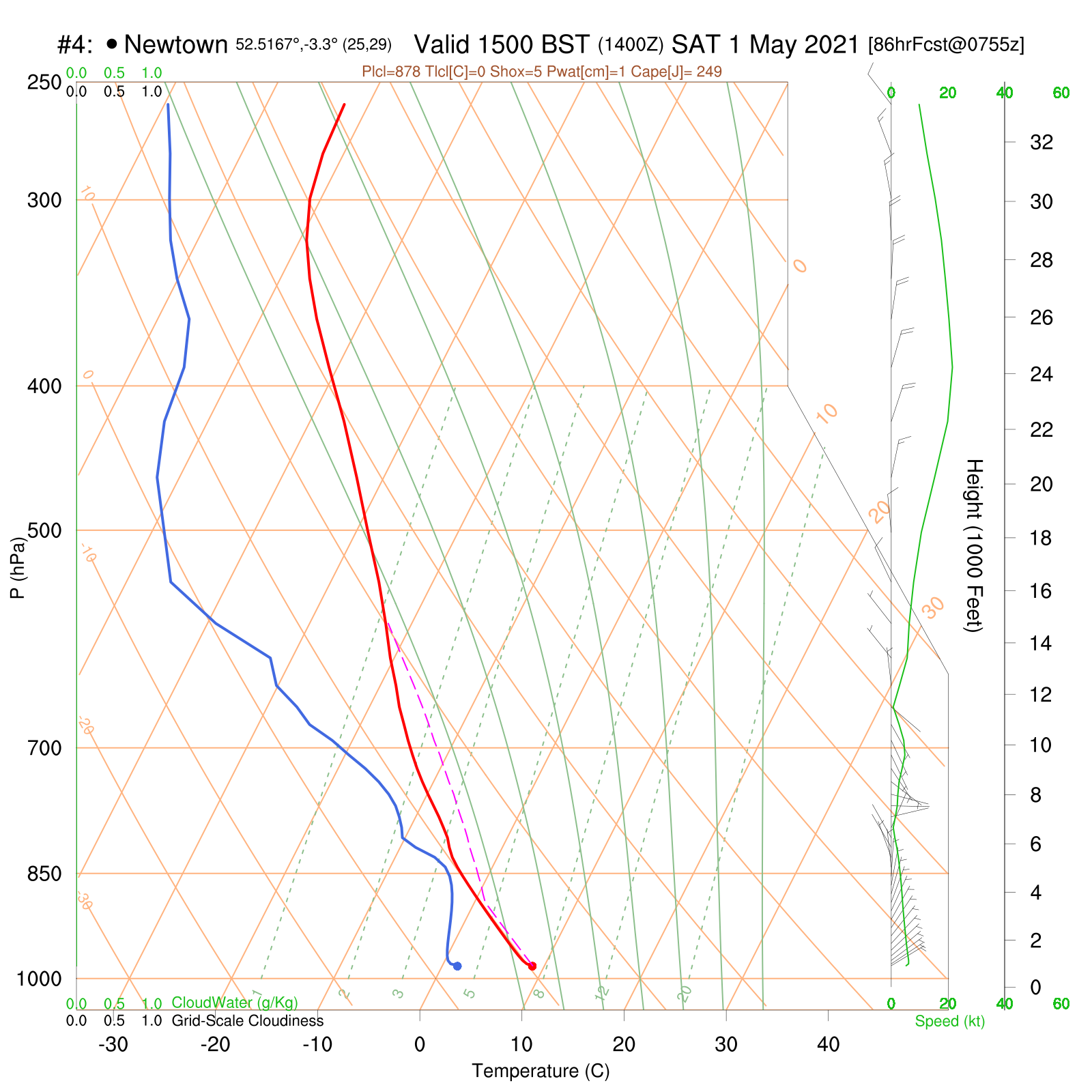