It will come as no surprise to read that April looks rather chilly when you sift through the weather data for the month so far!

The graph below is the daily max/min observations from the weather station on Cairnwell summit, at 933m in the eastern Highlands. Incidentally, the weather station higher up on Cairngorm summit seems to have thrown a wobbly in recent times - hopefully we'll soon see reports from there again too.

Early April brought some remarkably low temperatures with daytime 'highs' as low as -5C on the coldest day, and a run of days which stayed sub-zero night and day.

Contrast this to the varied but often milder conditions which we had from mid-February into March. Spring was bubbling along nicely at times!

Looking back into the heart of the past winter, do you remember just how sustained the cold and snowy weather was? The mountain data certainly highlights the sustained chilly conditions from mid December to early February, with only a brief rise above freezing on the high tops.

Our recent cold spell was certainly similar in terms of the temperature values. It was all thanks to a strong surge of air which came from deep within the Arctic circle. Blocking high pressure patterns around Greenland aided this particular weather event. It's all part of the natural variability of our weather and such patterns can often occur during springtime. Northerly outbreaks have been seen in several recent years during April - I recall a few times complaining that it would have been better to see such a pattern during winter proper!

Nevertheless, early April 2021 will certainly be remembered as one of the more potent springtime northerly blasts! 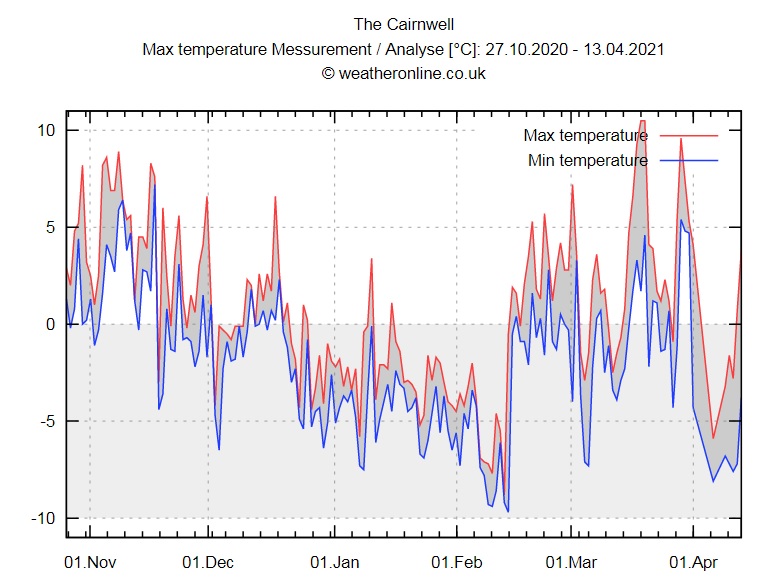